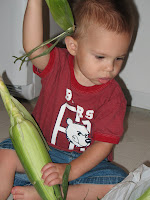 One thing we look forward to each summer is corn-on-the-cob from our local farmer’s market. I always wished I could have this flavor of corn all year round. While searching for farmer’s markets in our area, I found this fabulous article on how to freeze corn. I thought to myself, why not?

I picked up 4 dozen ears of corn and started off on the adventure. Nathan had a good time “helping” me husk some of the ears. (I turned my back for a second and he had started munching on some, though!) 🙂 All in all, the process wasn’t too bad. I wasn’t able to get a FoodSaver machine (We’re on a budget!) so I invested in a Handi-Vac by Reynolds. They run about $9 or less and the bags are around $2 each. How simple are they to use? I let Nathan use it to suction out the last bag. I was very impressed with it. I’ll have to see how well it keeps things from getting freezer burnt. I plan on using this for everything I freeze now! The bags cost around the same price as regular freezer storage bags.

How much of a savings? Well, it was hard to put an exact dollar on this. I lost some from Nathan stealing it and feeding it to the dogs but overall, I ended up with about 24-12oz bags of frozen corn. I did leave some ears for lunch/supper. So in the end, I think I saved about $15 with just this one batch. (I figured low, getting the 12oz bags on sale for $1 in the store.) If I would have done this without Nathan, I probably could have gotten a few more bags but we had so much fun that I didn’t care about our “losses.”

But overall, can you really put a price on farm-tasting corn year-round? I am looking forward to adding some of this to our Taco Chili recipe that we make on the first kick-off game of the Bears! 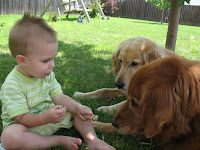 Today turned out to be the perfect Tater Thursday. On our way to get into the SUV, Tater started his “eh-eh,” letting me know he wanted me to see something. There was a little white butterfly in the front yard and he began to chase it, laughing so cute the entire time. Then, off we went to…the Dog Park!

When we first got there, a little jack russell greeted Tater at the gate. The owner came over and held his collar so Tater could pet him and I asked if it was OK if Tater gave him a treat. Instant friends! This little guy came up to Tater quite frequently afterwards. It was all women dog owners there at the time and they LOVED that Tater came to visit. I think it made their visit a little better,too! Tater found a tennis ball in the grass area and began to bounce it around, chasing after it. If only Jack had been there to play! I wasn’t crazy enough to take two goldens, a toddler and my pregnant self to the park! 🙂 Airplanes flew overhead (which fascinates Tater). I let him run around for awhile and then off to our next stop…

Petsmart! Some may say that they have higher prices,but they provide such a unique shopping experience that it can be worth it! Today wasn’t a shopping day but a “mini-zoo day.” We checked out the “birdies,” “kitties,” mice/rats, fishies and of course, more doggies! Their Doggie Day Camp was empty but there were a couple “shoppers.” Now the whole point of $2 Tater Thursdays isn’t to spend $2, but to try to not spend more than $2 for the entire outing. But, Tater and I both knew that when we got home, we’d get “yelled at” by Homer & Jack so we picked up some treats for them. I gave Tater his $2 bill and he handed it to the cashier (which she loved!).

We came home and had a picnic under our little tree with Homer & Jack.(pictured above) Tater loved giving them their treats and they seemed to forgive us for ditching them.

Total cost for our outing: $1.29. Since we had to go to the bank and return movies that were due, it wasn’t any extra gas expense. I didn’t want the extra money to be “rolled over,” as I’d like to keep it to $2 or less, so we decided to put the change in a special Piggy. At the end of the year, we’ll take one really nice outing with what’s left.

If you decide to do a doggy park adventure, here are some tips:
1)Remember: The dog park is for the dogs! Don’t expect the dog owners to protect your child. Always ask if it’s ok to pet each dog. Never give them a treat without permission. And avoid large gatherings of dogs. They could “play fight” and accidently knock your child over.
2)Dogs will be dogs! If you don’t like your child being licked or jumped on, don’t take them! The little dogs like to jump a lot and yes, your child could end up with a small scratch. But as long as you keep a close eye on them, they’ll be ok. Also, if the dog park is PACKED, don’t stop! You want to have fun, not get hurt.

So if your week has been a little “ruff,” consider taking the day off and checking out your local dog park!

The great thing about budgeting is that every $1 of income is accounted for. Do you know where all your income goes? Yeah, we didn’t either! We had some things set-up to be paid automatically with our credit card each month. This is convenient, however, if you aren’t checking your bills each month, a price increase or fee might sneak in on you. Here are the “silly expenses” we found when we started digging into our bills for our latest TMM Journey. Go ahead and laugh- We did!

1)Water Delivery- We started this when I was pregnant with Nathan. We were tired of buying bottled water and wanted healthy water,too. Our city water isn’t the greatest tasting! We swear when we started this, it was closer to $25mo. When we made our budget, we found it was up to $46! The cost had just gotten lost with our other credit card purchases and didn’t stand out each month. What did we care, it was being paid for. Little did we know, over time, there were water price increases and “energy fees” added on. Sadly, we were only using about 15gal mo. so it avg to almost $3gal! SILLY! Needless to say, we canceled delivery and invested in a water purifier pitcher until we decide if we need to get a faucet system or not. Yearly Savings: $552!

2)Landline Phone- The great thing about phone companies is that they can take a $50 phone plan and make it $70 after all their taxes. We weren’t even using it all that much. And in the meantime, we racked up 3,000 roll-over minutes on our cell phones. SILLY! We cut our landline phone to the bare bones plan and are using our cell phones for outgoing calls now. Yeah, it’s not always the greatest reception but check out the Yearly Savings: $540!

3)Mutt Mitts- What the heck is a Mutt Mitt,right? It’s a glorified doggie-doo bag. Rich faithfully walks Homer twice a DAY and with bad timing, can have to carry “doo” for 7-8minutes. It didn’t seem like much $ until we figured yearly costs. SILLY!Now,he’ll be using grocery sacks or something else free! Yearly Savings:$120!

Total Yearly Savings: $1,212! Sounds like a lot now, right? But then we looked at it this way..almost SIX car payments! By cutting out all these “sillies” we are now 6mo. closer to having our car paid off. All just by cutting out simple conveniences. And we’ve just gotten started into itemizing everything. Who knows what else we’ll find!

So, I encourage you to take a good look at your expenses and cut out all your silliness,too. It will pay off, literally! 🙂 Wait until you see what you find! Feel free to share your findings/stories in the comments field. We can all learn together! 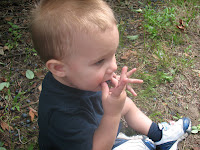 So first I have to explain that “Tater” is our nickname for our son, Nathan. Silly how he went from Nate to Nater to Tater but that’s how it all happened. 🙂 This week, Tater and I went out on a blueberry picking adventure. I made the mistake of going mid-afternoon, when it was a lot warmer out, but in the end, it turned out to be a good time. Nathan did more digging than picking. But we did end up with a little over a lb. of blueberries. The days’ expenses were $1.98 for an hour of fun and making memories! On the tractor ride to and from the bushes, I ended up talking with the same woman. She shared in some blueberry tips and “grandmothered” Tater by cleaning him up on the way back. It was a fun little experience.

So I’ve come to the idea that every Thursday will be $2 Tater Thursday. I want to try to get Nathan out into the world to experience something new and have some fun but we have to stick to the $2 or less limit. It will be fun to see what things we can come up with! Tune in for next week’s adventure!!

On a side note: I did go back on Saturday and picked 4.69lbs more of blueberries. They are frozen and ready for our waffles, cereal or just plain eating alone!!

Save Money With These Tips!

Thank you to all of you for visiting and supporting Coupon Geek website! I hope that you were able to find some useful money-saving things while you were here. Please visit again soon!

Learn How to Coupon